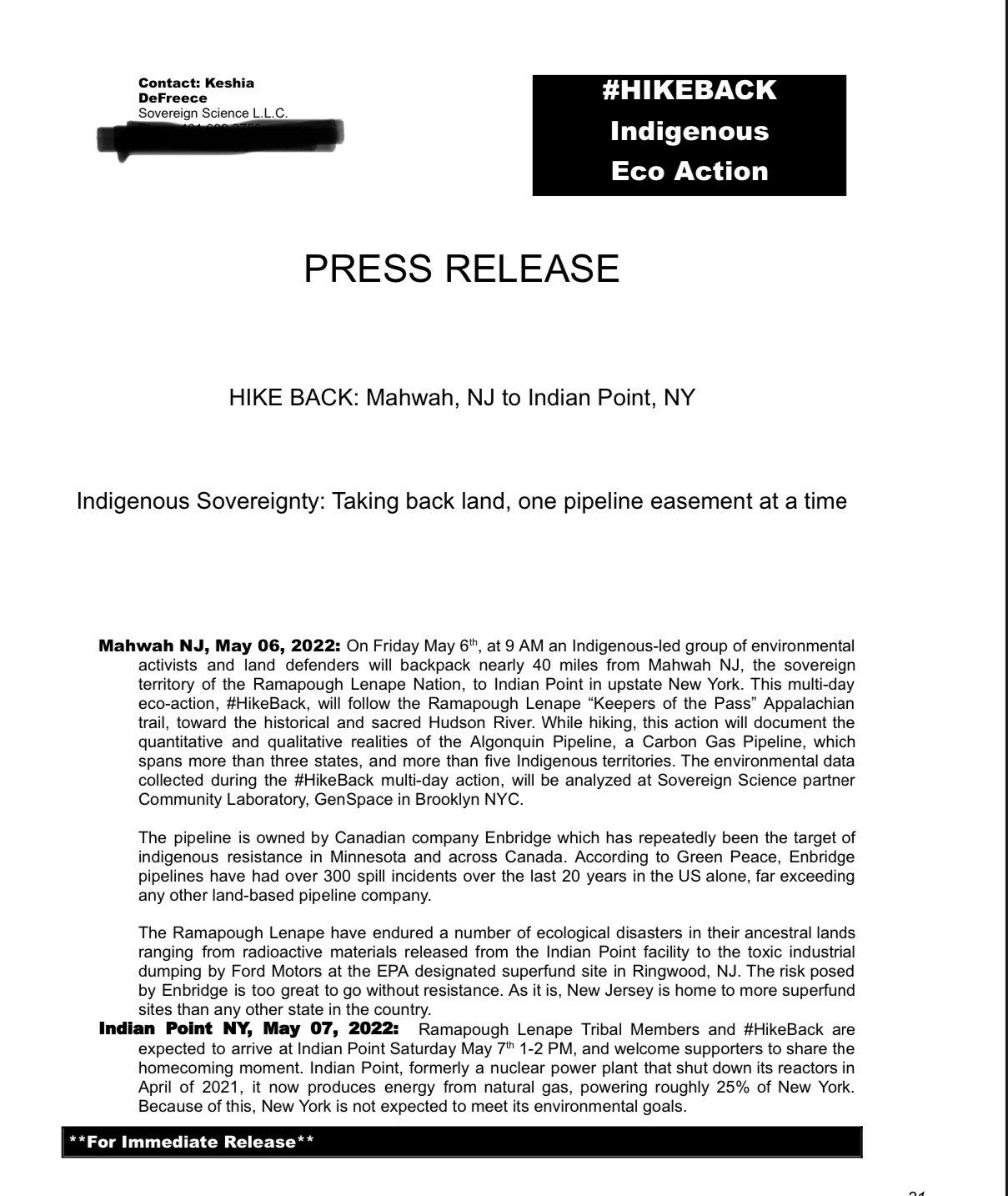 Indigenous Sovereignty: Taking back land, one pipeland easement at a time

Mahwah NJ, May 06, 2022: On Friday May 6th, at 9 AM an Indigenous-led group of environmental activists and land defenders will backpack nearly 40 miles from Mahwah NJ, the sovereign territory of the Ramapough Lenape Nation, to Indian Point in upstate New York. This multi-day trail, toward the historical and sacred Hudson River. While hiking, this action will document the quantitative and qualitative realities of the Algonquin Pipeline, a Carbon Gas Pipeline, which spans more than three states, and more than five Indigenous territories. The environmental data collected during the #HikeBack multi-day action, will be analyzed at Sovereign Science partner Community Laboratory, GenSpace in Brooklyn NYC.

The pipeline is owned by Canadian company Enbridge which has repeatedly been the largest of the indigenous resistance in Minnesota and across Canada. According to Green Peace, Enbridge pipelines have had over 300 spill incidents over the last 20 years in the US alone, far exceeding any other land-based pipeline company.

The Ramapough Lenape have endured a number of ecological disasters in their ancestral lands ranging from radioactive materials released from the Indian Point facility to the toxic industrial dumping by Ford Motors at the EPA designated superfund site in Ringwood, NJ. The risk posed by Enbridge is too great to go without resistance. As it is , New Jersey is home to more superfund sites than any other state in the country.

Indian Point NY, May 07, 2022: Ramapough Lenape Tribal Members and #HikeBack are expected to arrive at Indian Pint Saturday May 7th 1-2 PM, and welcome supporters to share the homecoming moment. Indian Point, formerly a nuclear power plant that shut down its reactors in April of 2021, it now produces energy from natural gas, powering roughly 25% of New York. Because of this, New York is not expected to meet its environmental goals.